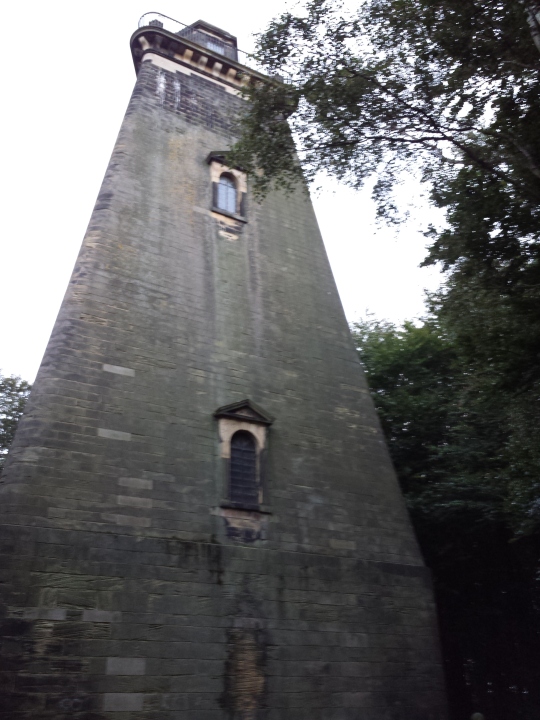 Hello everyone and in this article we are going to look at a local location we have investigated many times called the Hoober Stand. Many will know of this location from over the years, its a monument dedicated to the memorial of the Jacobite Rebellion standing on high ground in Rotherham. In the past we have seen rituals performed at the site, we have seen two alters erected there and had many interesting investigations. But there is one thing we would like to cover concerning some results we picked up as we investigated under the team Paranormal Hauntings when Aimee, Charlene, Chrissie, Simon and Philip conducted an investigation there.

The investigation was done on a Saturday night a very wet and rainy Saturday night at that, so wet in fact Philip dropped the ball quite literally as the plasma ball slipped out of his hands, (sorry Charlene). As we were carrying out ITC a few words stood out, so much that when Aimme and Charlene returned to the cars they highlighted to John of the team that the ITC came out with the words “Pendle” “Witches” & “Hoober”. At first we thought that`s interesting as the team did visit the Pendle area a week before but not happy with that Aimmee asked if John would be interested in doing a little digging. So he did,

We set out looking for a connection between the Hoober Stand monument or the Wentworth/Fitzwilliam families that owned/own the land and estates of the area. We got excited as it was looking like a massive connection existed between Thomas Wentworth and Margret Gascoigne. The reason for the excitement was the fact that the Gascoigne family lived at Gawthorpe Hall and straight away this reminded me of the story of the Pendle witches and how some say a servant from Gawthorpe Hall accused a woman in the first place of witchcraft. This history is said to have cursed Gawthorpe Hall and with Thomas Wentworth marrying into the family and taking ownership of the hall we thought for a short time we had found a connection.

Thomas Wentworth married Margret Gascoigne of Gawthorpe Hall in Yorkshire and this is the wrong hall if your looking for a Pendel connection. One interesting thing is the hall no longer exists to this day it is merely remains under the garden of Harewood House.

The Gawthorpe Hall in Lancashire is the hall with the history that leads some to say it has a curse connected to the Pendel Witches. Some say a servant from Gawthorpe Hall accused the women of witchcraft in the first place, this was Richard Shuttleworths servant and it is due to Richard Shuttleworths involvement in the trials and family ownership of where the accused lived that gives some the reason to think this Lancashire Hall is truly haunted.

What Now For Our Initial Research

So due to our ITC inspired research we have delved into a bit of history, we have found out there was two Gawthorpe Hall`s one in Lancashire and one in Yorkshire and with this there are two areas also with the name Gawthorpe. The Lancashire hall still stands today and maybe this would be a good location to investigate. The Yorkshire Hall no longer stands but the remains lay under the garden of Harewood Hall so again this maybe a good place to investigate.

Is there a connection? – Maybe or is there another secret a spirit from the land of Hoober wants us to unearth. After Thomas Wentworth married Margret Gascoigne the Gawthorpe Hall he received fell, the Wentworth estate further along the timeline also fell, some say at one point Wentworth House was one of the most powerful places in the world but it fell. Another interesting factor to maybe look into is the fact the Gawthorpe Hall in Lancashire was built around a Pele tower and this land and the owners of this land had history in the Jacobite conflicts. Hoober Stand has a dedicated plaque to the Jacobite Rebellion.

We will carry on searching 🙂